The smallest house in Portugal, a Port wine tour and one of the most beautiful bookshops in Europe. Here are my 10 Must Dos in Porto.

My personal 10 Must Dos in Porto

One of the first things I check in a new city are the Free Walking Tours. They give you a bunch of interesting and also fun facts about a new city. If you liked it at the end, you tip the guide. In my hostel in Porto the guide even picked me up and brought me to the meeting point in Praca de Liberdade. We were over fourty people so they splitted the group in two – leaving one guide for twenty people.

We started walking and in the next one and a half hour I walked up and down the hills of Porto, saw the oldest café in the city, hiked up some Roman walls and ate the best chocolate cake in the entire world. The place is so secret you can only find out by doing a this tour.

I cannot hightlight this enough: If you want to experience a new place through the eyes of a local, join one of the Free Walking Tours. Usually they even have different topics so when my tour guide asked me whether or not I’d be interested in doing a Port wine tour later that day, I knew I’d be down. 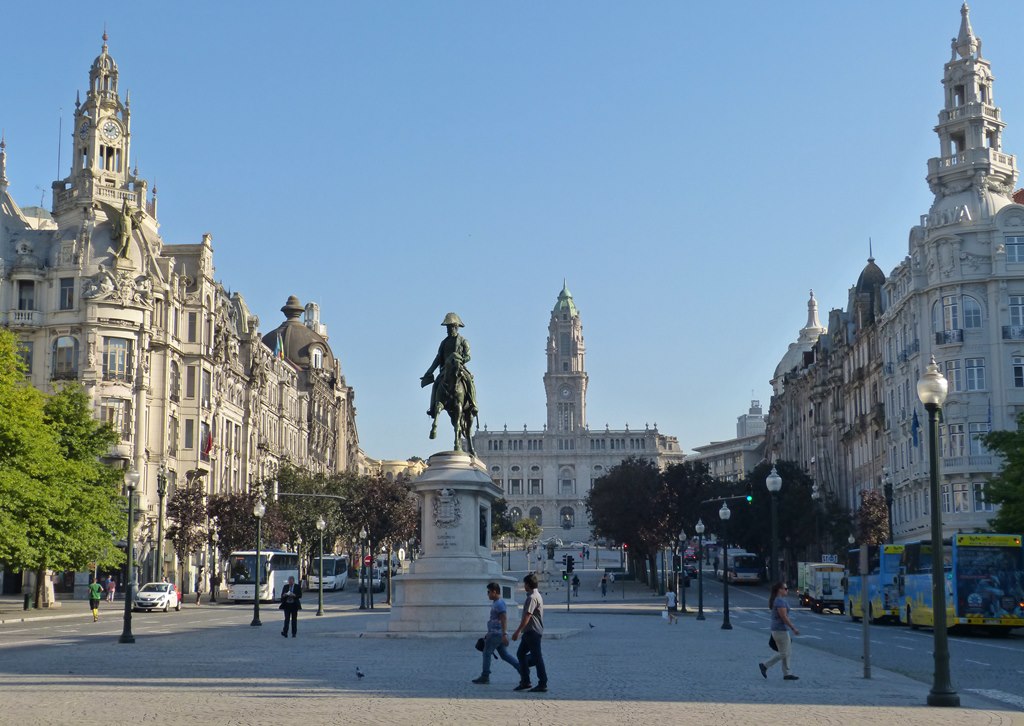 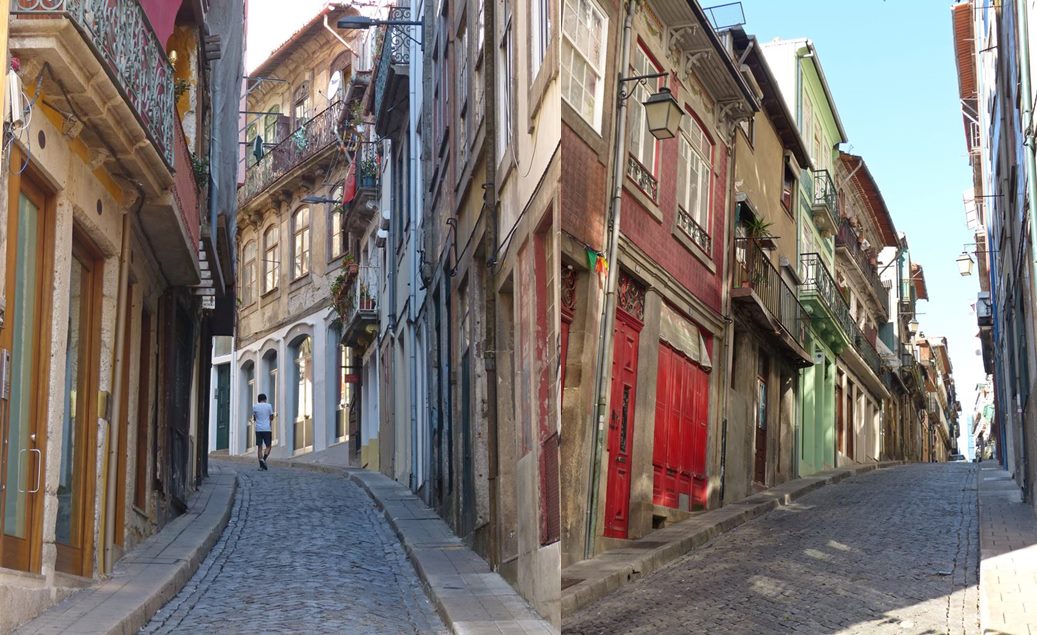 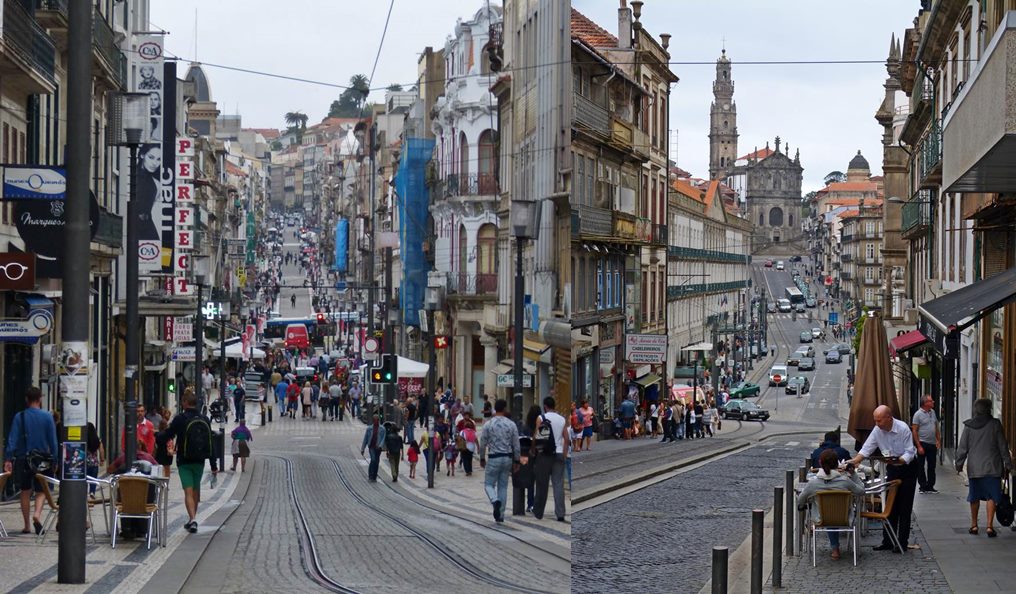 Igreja das Carmelas, Igreja do Carmo and the smallest house in Portugal

Standing between these two churches is probably the narrowest house in Portugal. It’s only one meter wide which can be put down to a law stating that no two churches could share a wall. In the neighborhood there are some attractive squares, with cafes and bars. Also the Livraria Lello is only a stone’s throw away.

If you wanna have a beautiful view over Porto, go to Igreja de São Pedro do Clérigos close to the main ralway station. It’s the highest bell tower in Portugal and one of the main attractions of the city. In earlier times it was used as an orientation method for incoming ships. For a small entrance fee of two euros you can climb up the tower and also visit a small museum inside of the house of God.

Try get there at a non rush hour time otherwise you’ll have to wait up to 45 minutes. The climb of 225 steps can be quite exhausting but so worth it. The view includes the historic center of Porto, the modern buildings, the famous colorful houses and the river. Afterwards peek inside the church which looks nice but without the tower is no highlight in itself.

This book shop looked so outstandingly cool on photos that I had to see it with my own eyes during my time in Porto. The wooden interior and creative architecture is crazy beautiful, especially the round straicase up to the first floor. In recent years Livraria Lello became quite the tourist attraction, not just due to Harry Potter, so if you wanna see it and take pictures without hordes of people on it, get there as early as possible.

To go in you’ll have to buy a ticket for three euros which isbeing sold across the street. The amount will be withdrawed from the check if you decide to buy something. If you’re lucky you can walk right into the book shop but in busy times you may have to wait a while. Another reason why you should come early! It can be quite hectic in Livraria Lello but while in Porto you shouldn’t miss out on one of Europe’s most beautiful book shops! 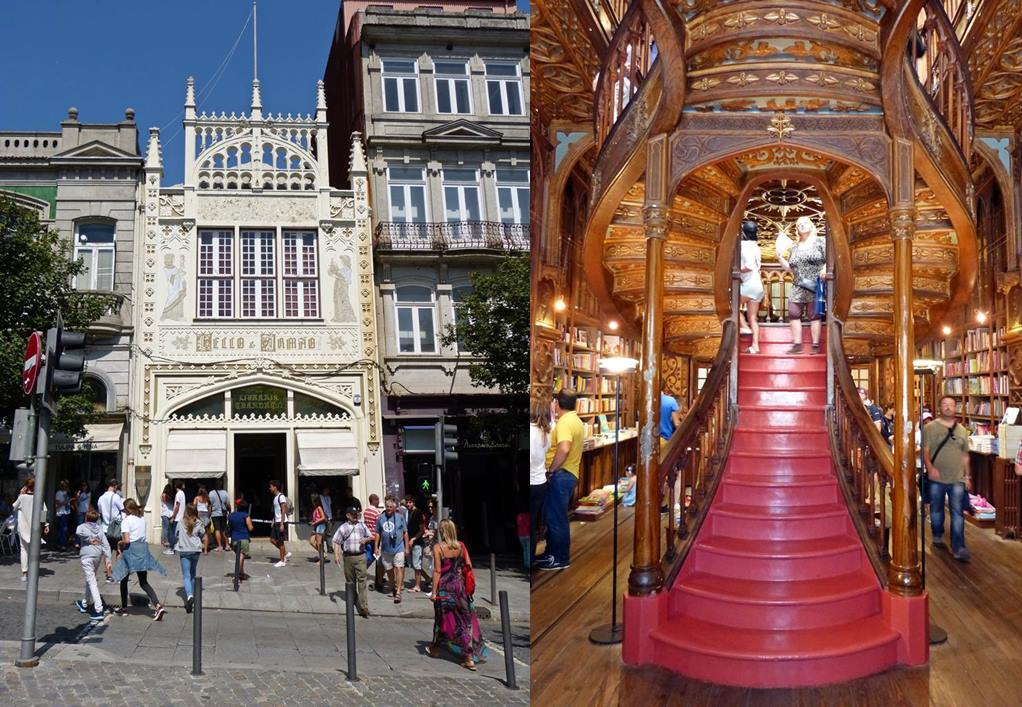 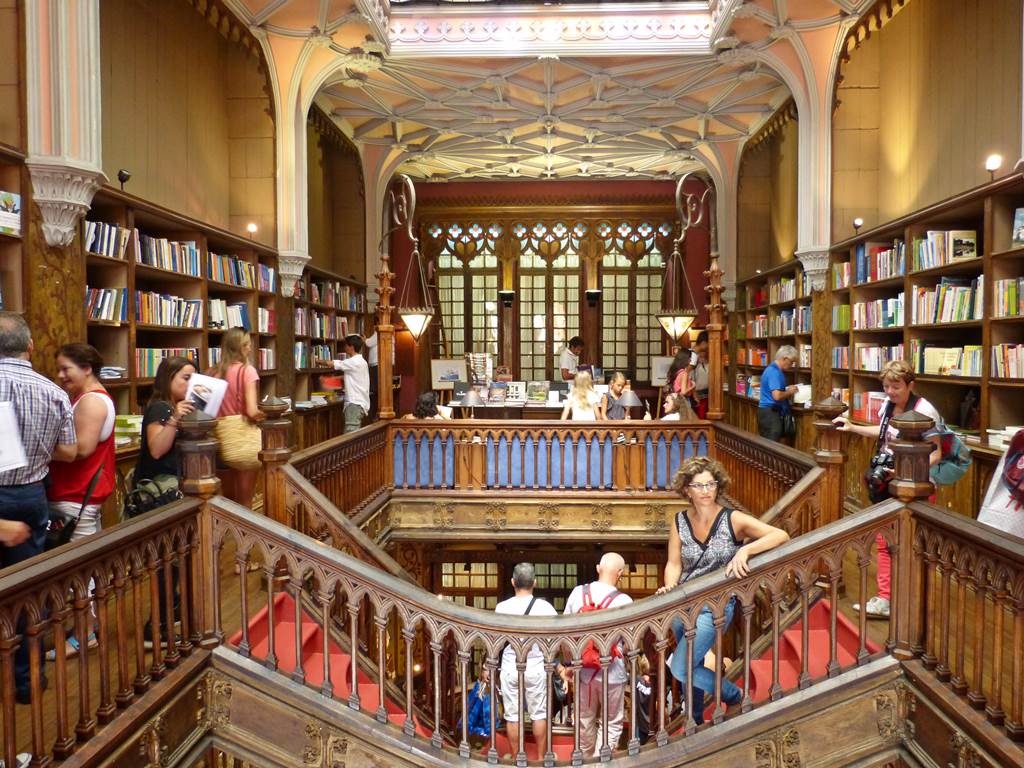 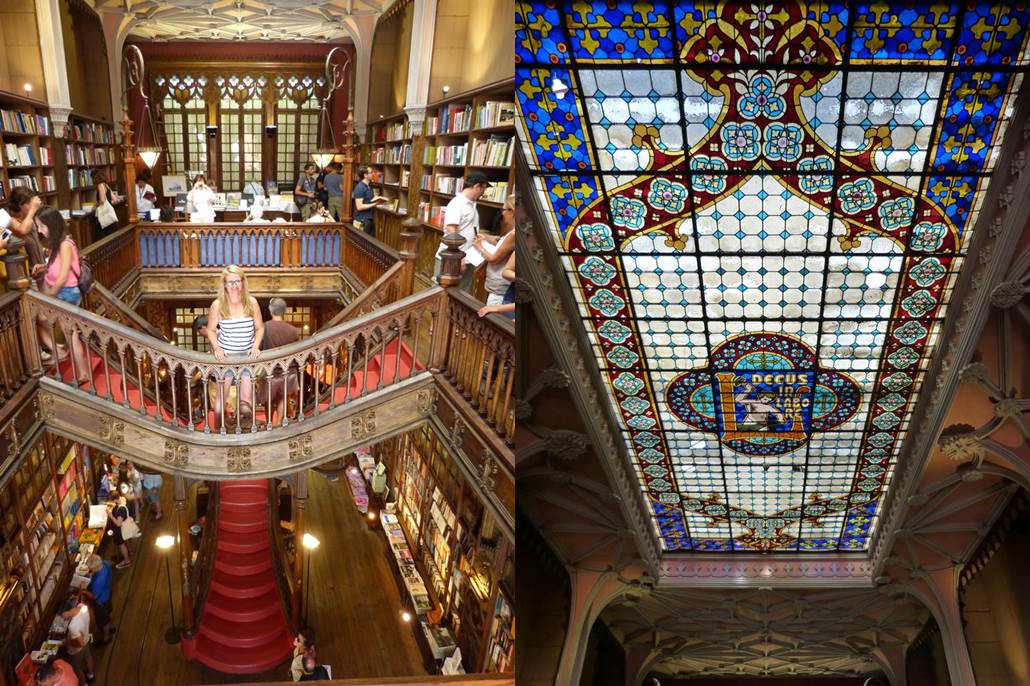 One of the first impressions I’ve had of Porto was the moment I stepped out of the train at São Bento. Located in the heart of the historic center this station only has a few rails but an astonishing architecture. Built on the site of a former monastery, which burned down by a fire in the 18th century, the Portuguese King Carlos I. laid the first stone in 1900. Sixteen years later the public building was finished. Especially the entrance hall with 20.000 blue and white tile panels depicting landscapes, ethnographic scenes as well as historical events of the city’s past are quite a sight. 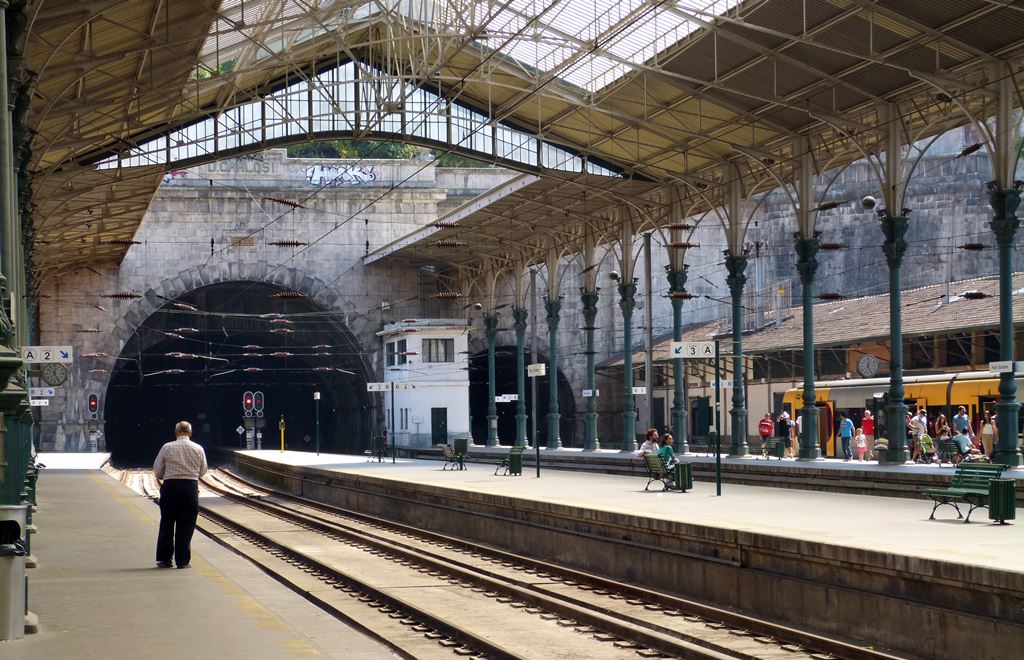 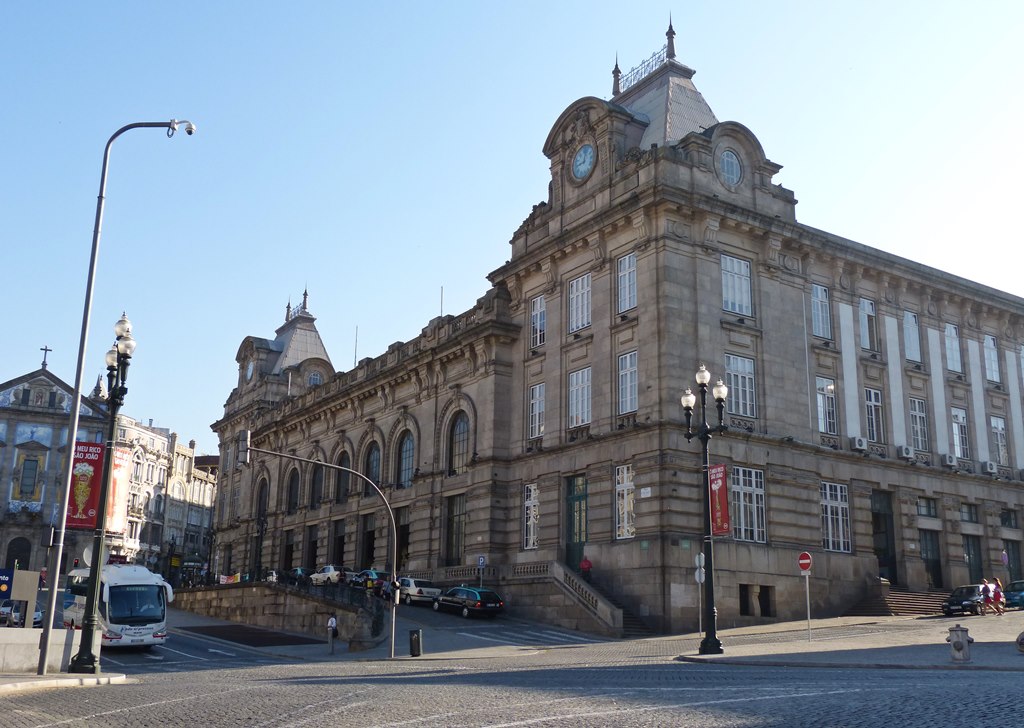 Port wine? This probably isn’t for me, I thought. Before my inner eye I imagined a really strong and dry wine. But as you may know I’m a strong believer in trying things first before rejecting them. Because of that I ziplined down a waterfall in Puerto Rico and ate black sepia pasta in Venice. I mean, come on! What’s the worst than can happen? I don’t like it. So what? That’s a prize I’m more than willing to pay for the chance to be surprised by myself.

Little did I know when starting the tour that I would come out of it being a Port wine fan from now on. Together with other young people from all over the world I visited four different locations on the other river side in Gaia. I learned about the winemaking process, saw an really impressive antique barrel collection and of course there was wine. Each of us were served 7 glasses of port wine in shades from dark red to bright gold-ish. To sum it up: My personal favorite is the White Port, which has a very sweet and fruity taste to it. 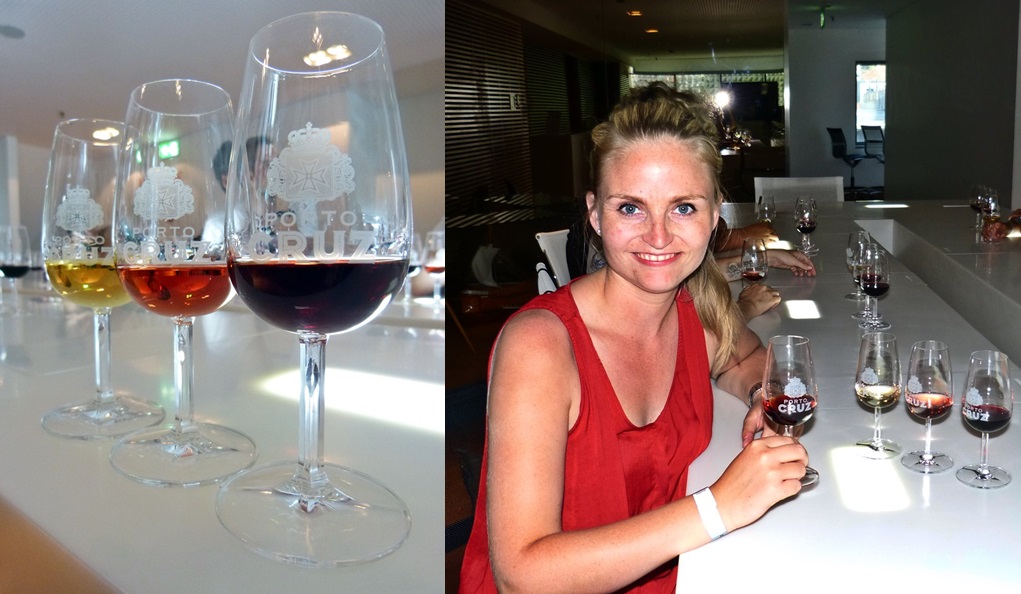 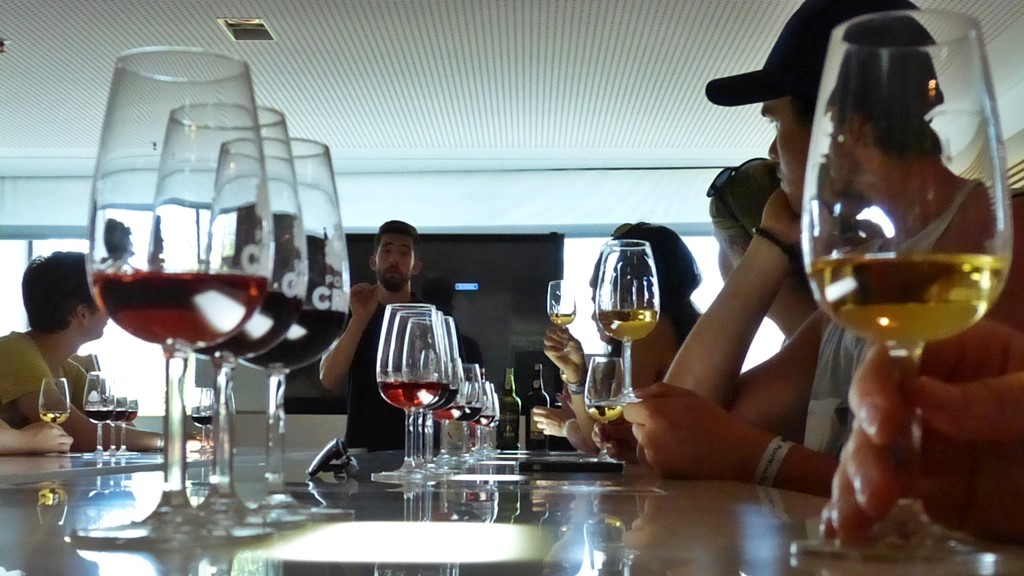 Located on top of a hill in the heart of the historic center is the Porto Cathedral. This massive Roman architectural building states back to the 12th century. The inside of the Cathedral is puristic with almost no ornamentations. Little advice: Keep an eye out for the closing time over noon.

The most beautiful part of the church is the Gothic cloister which show a lot of blue and white tiles. They are a really cool background for photos and from the terrace you’ll have a nice view over the Douro river. I tried working on my jumping pics and the best photo you’ll see below. 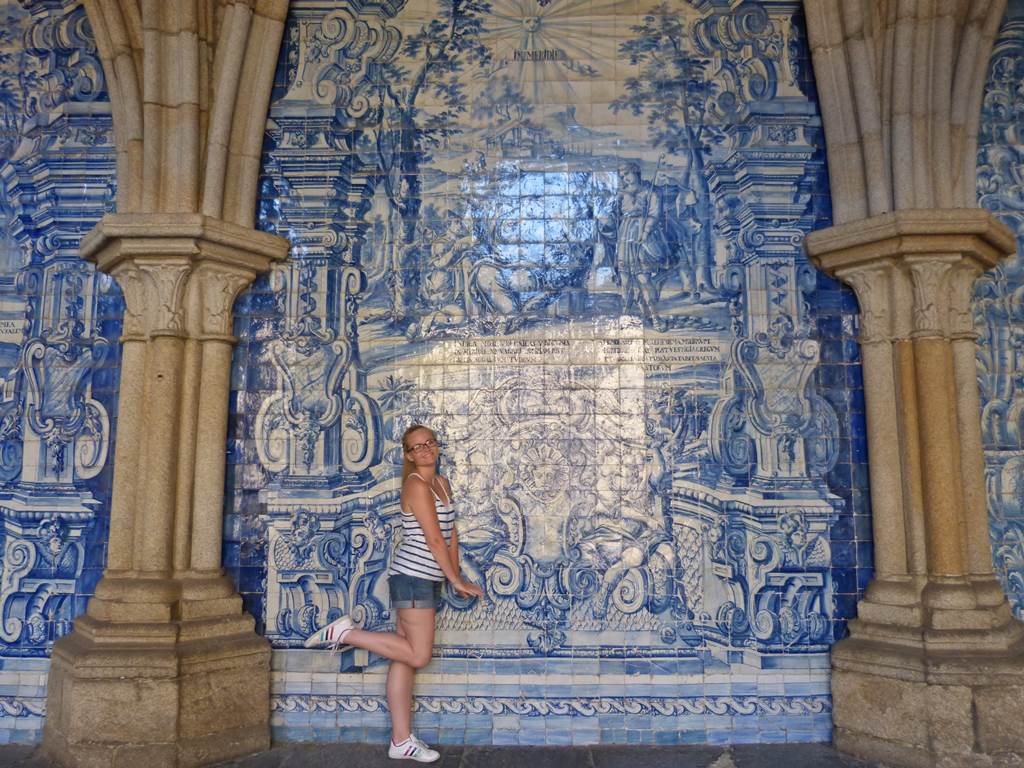 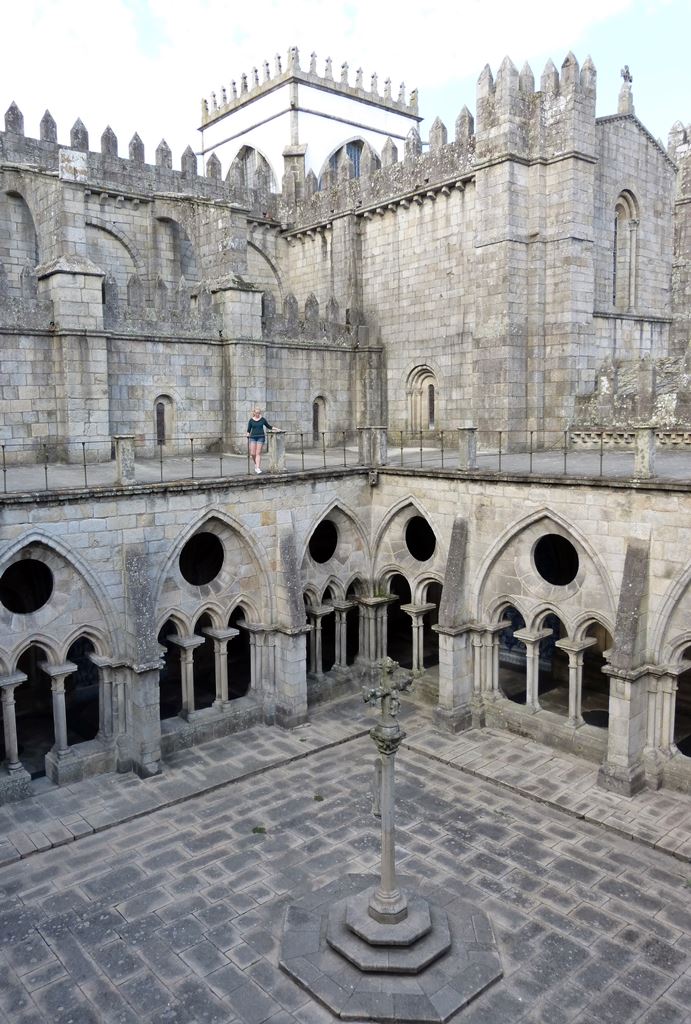 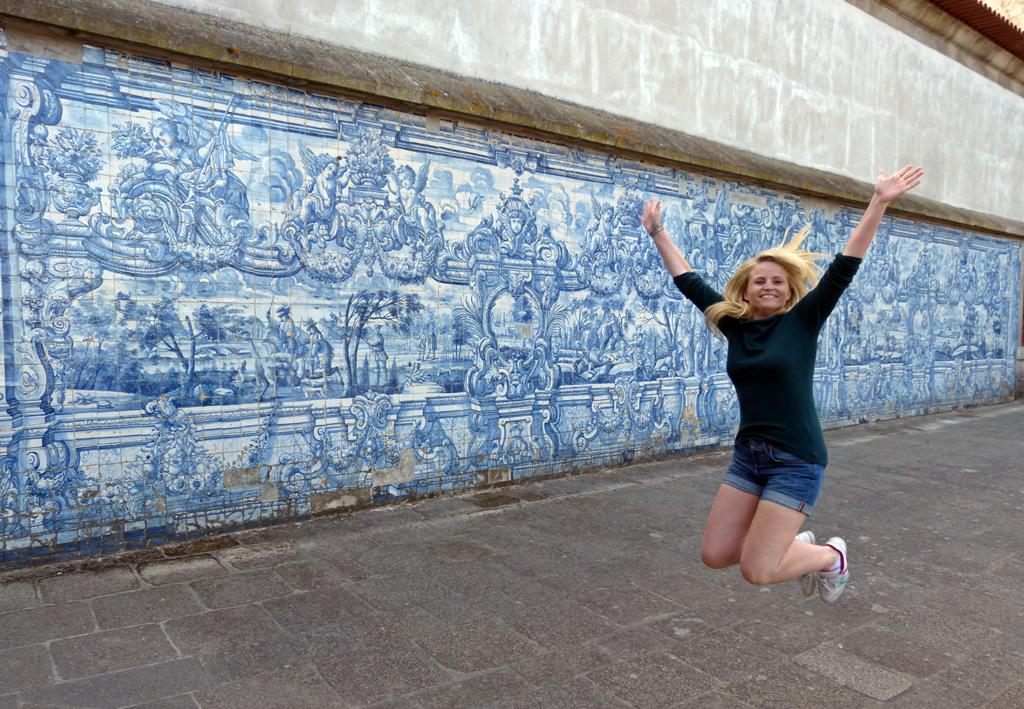 The Ponte Luís I is a huge iron bridge with two levels. Cars are driving through on the lower, trams on the upper level. Pedestrians can use both levels. The bridge doesn’t just connect two areas of Porto but rather Porto with Gaia, another city on the other side of the Douro river. Bring a sweater because the wind can get really cold on Ponte Luís I. Especially at night the lanterns turn the scenery into a beautiful photo setting.

You can also use the Funicular dos Guindais that will bring you from the lower street level up to the beginning of the bridge. However, in my opinion this is a tourist trap. You can easily walk up that hill and in busy times the wait is just not worth the ride of thirty seconds. 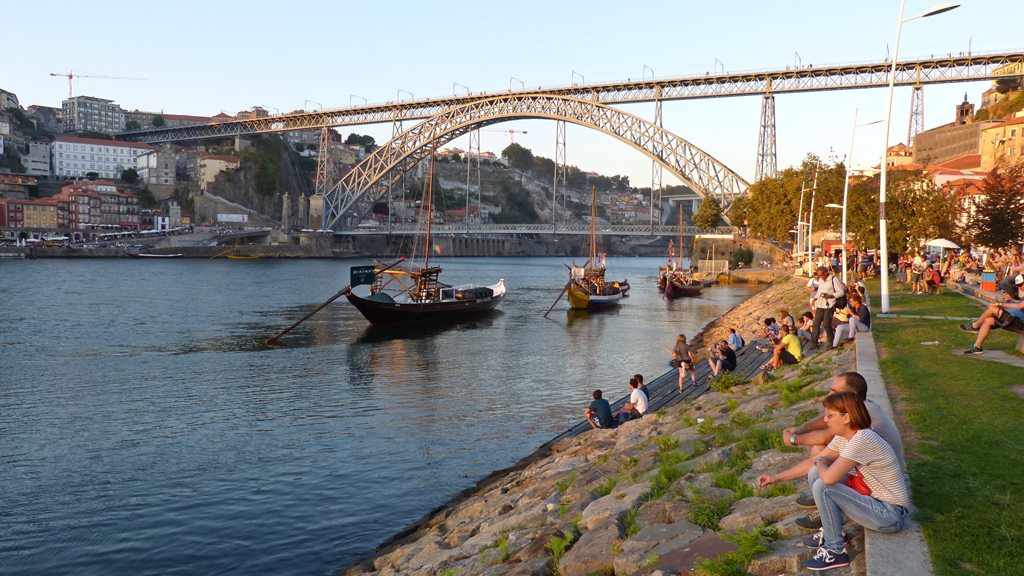 One of the Must Do’s while in Porto is going for a stroll along the Zona Ribeirinha. Cute little restaurants and cafés are located inside of  the former city wall. Behind of it characteristic houses in yellow, blue and red were built . Boats are lying at anchor and playing street musicians give the place a special atmosphere.

Head over the Ponte Luís I and walk along the promenade of Gaia. It offers amazing views on Porto and especially at sunsets it’s nice sitting at the water side with a drink which you can buy at on of the street sellers. Watch the painters or the world go by and just enjoy the moment. 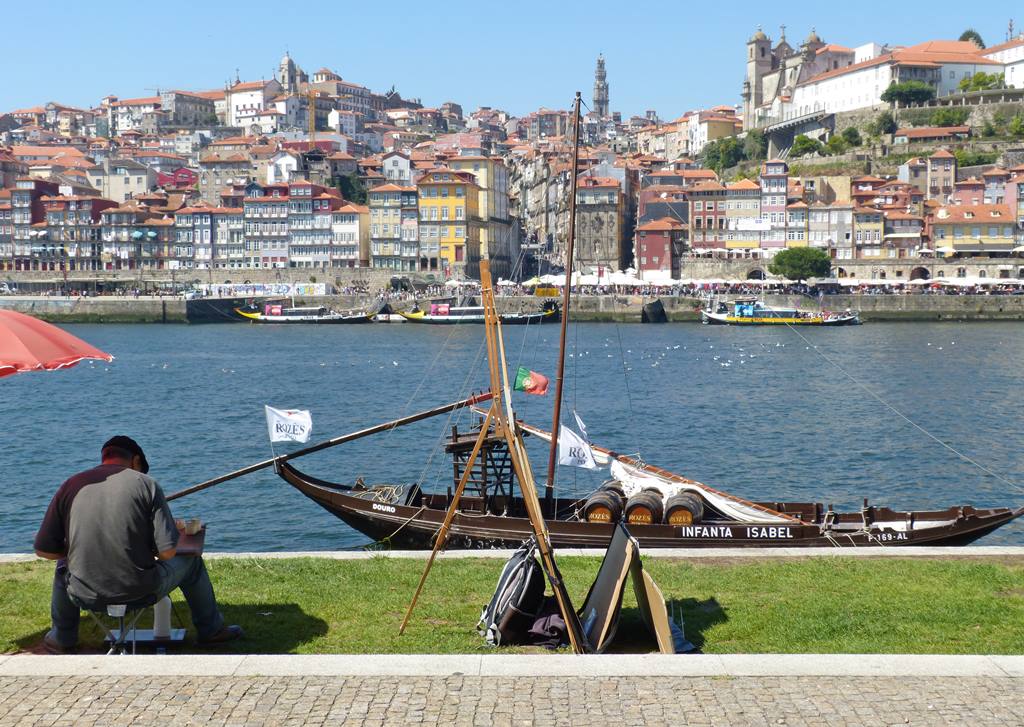 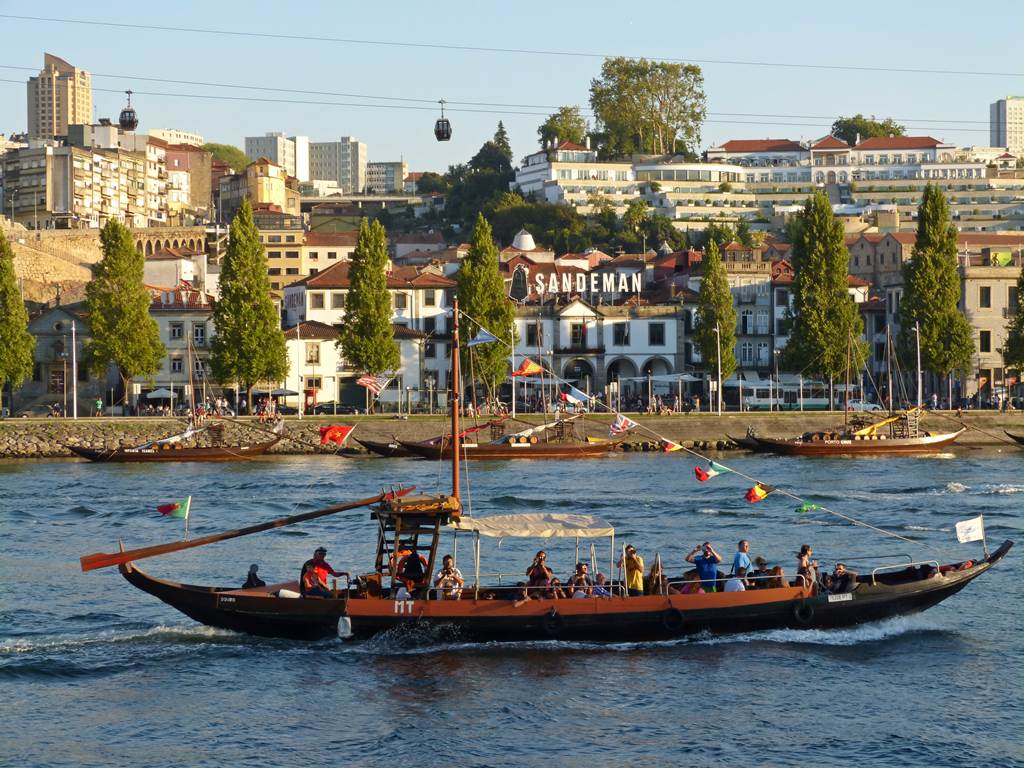 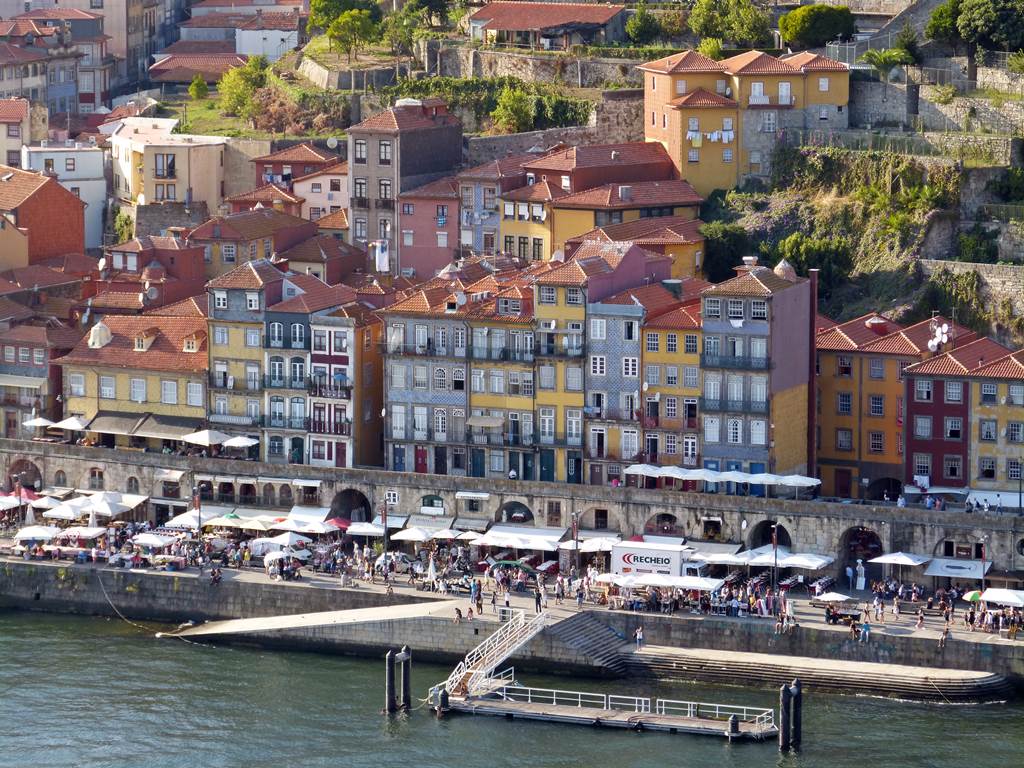 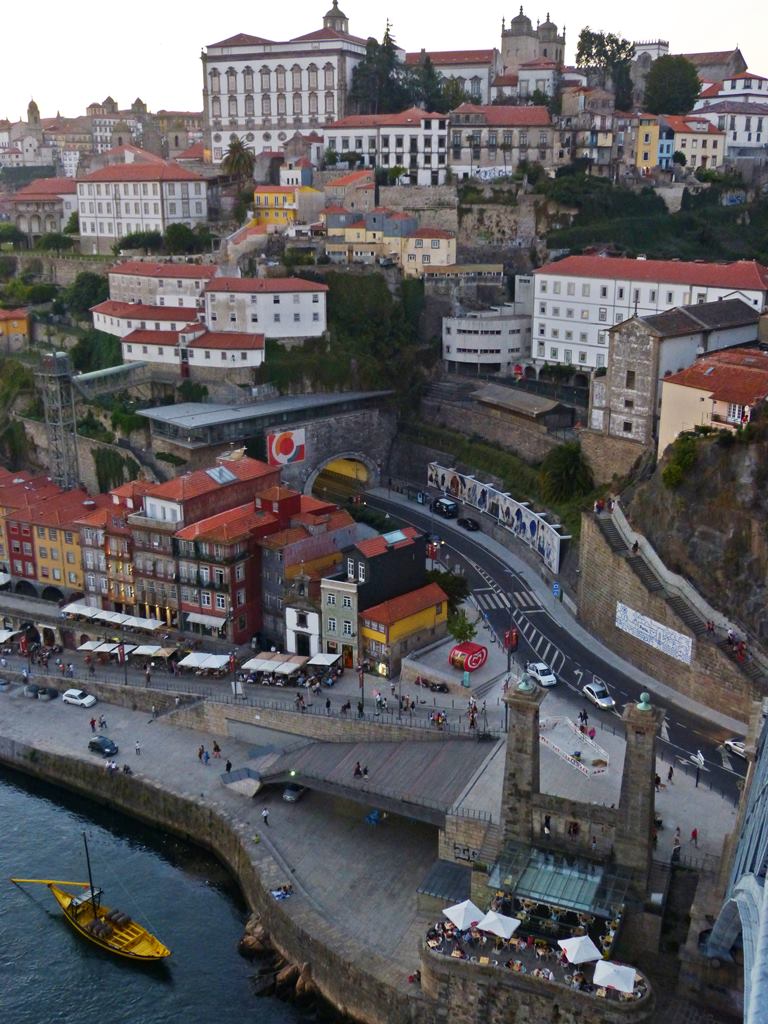 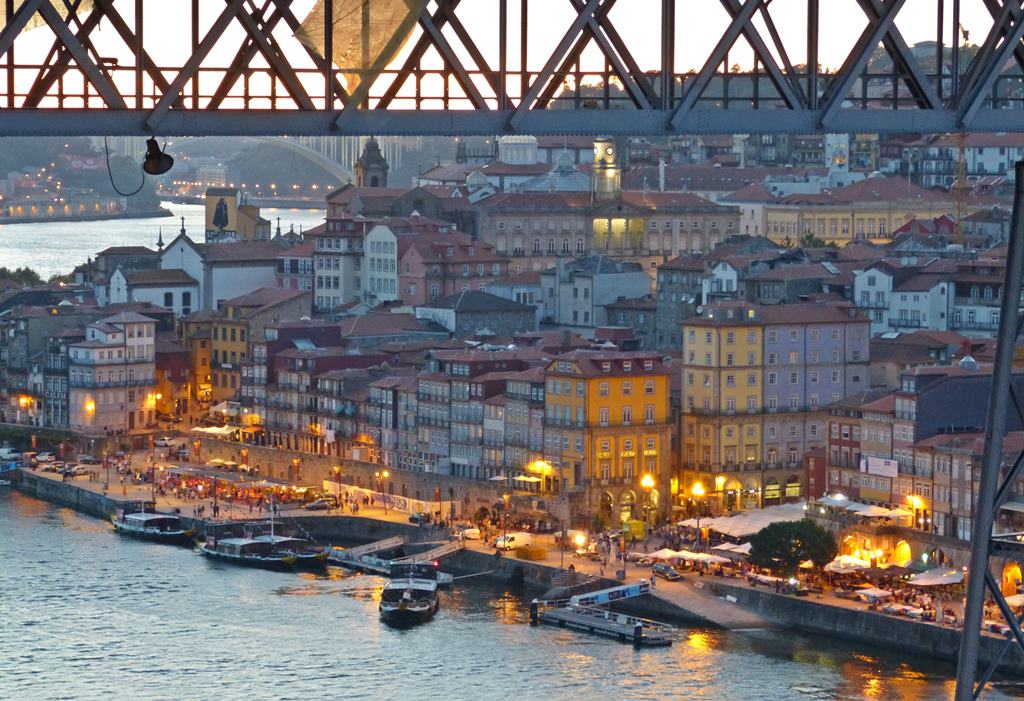 Another possibility to watch the sunset over Porto is at the Mosteiro da Serra do Pilar. The monastery has a free viewing plattform which, if you wanna reach it, you’ll have to hike up a short but steep way. Bring a snack with you and take a seat on one of the park benches. Don’t forget to bring your camera because the views are breathtaking and only after the sun set the colors will display their true warmth. This is a spot you really shouldn’t miss, but take a look for yourself! 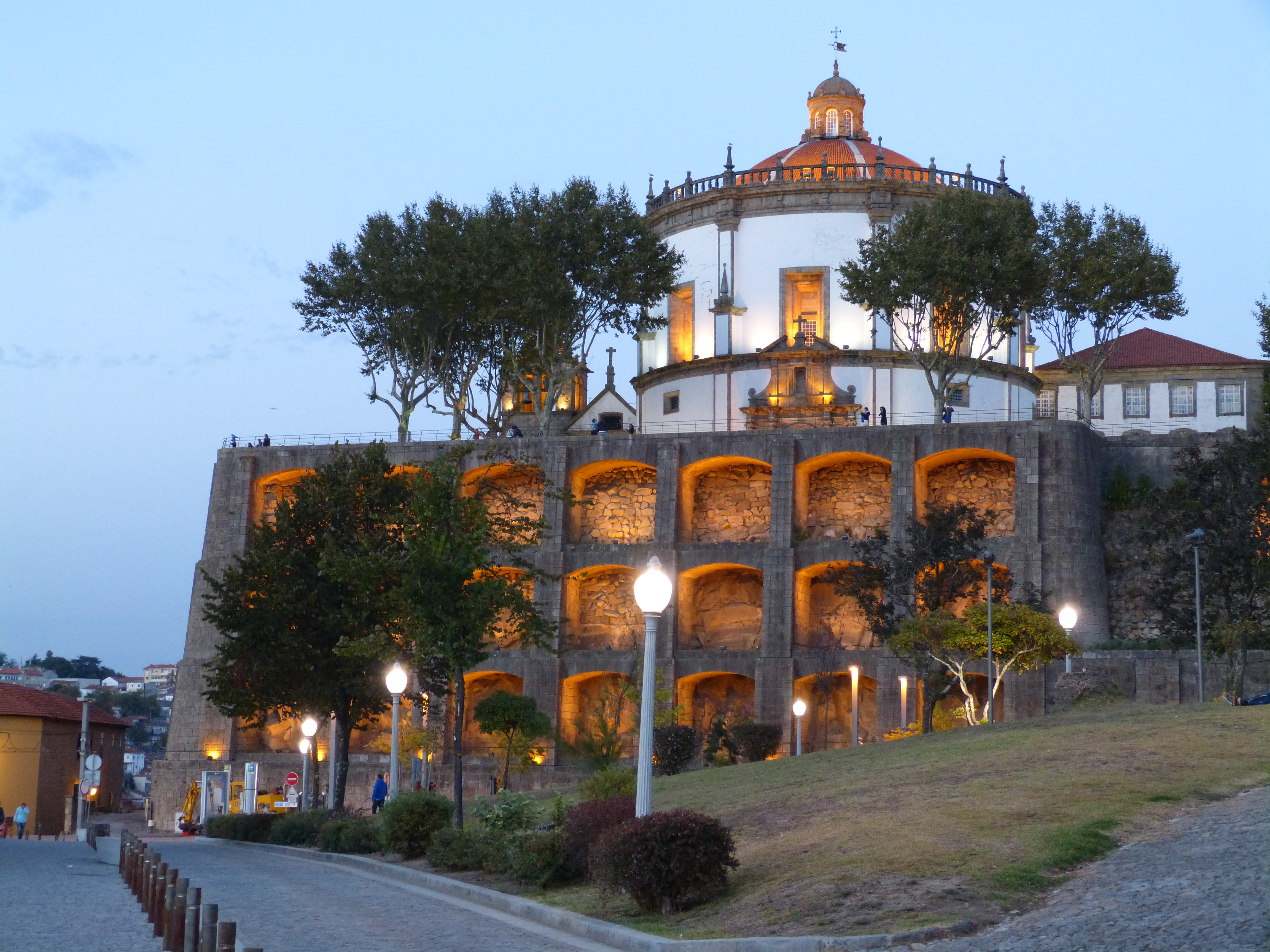 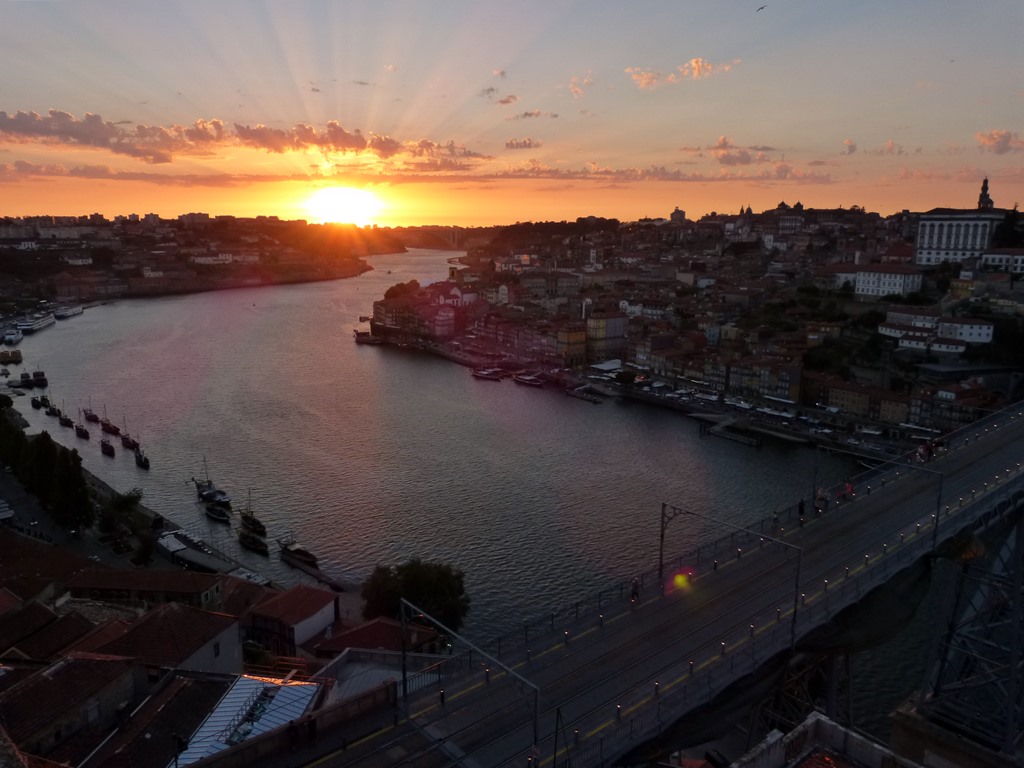 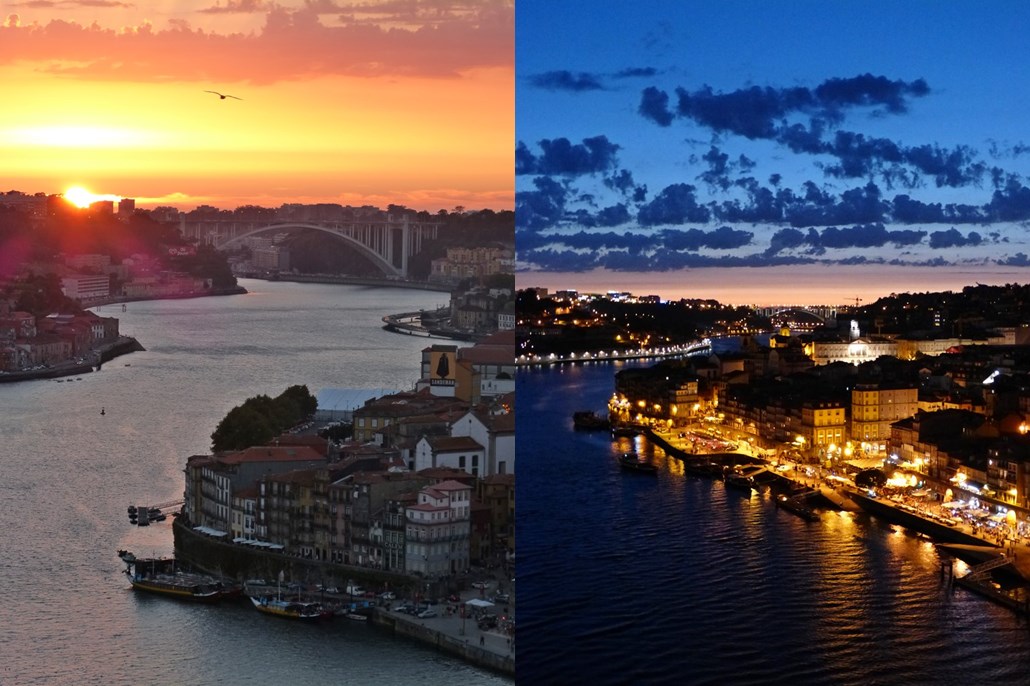 Have you been to Porto? Or are you more of a Lisbon fan yourself? Tell me about your experiences in the comments below. I’d love to hear it! 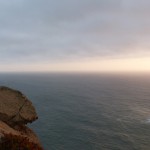 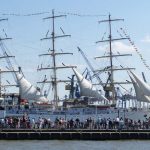